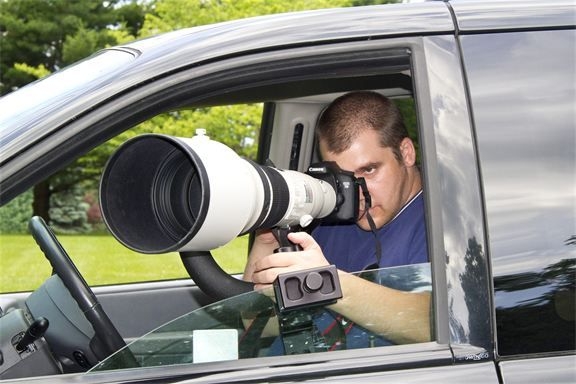 I first picked up a camera in April of 2006. My main objective was to be able to get high quality photos of the big whitetail bucks I had been videoing since 1998. Well the first thing I ended up shooting was an awesome bear from less then 20yds. I was so excited by the pictures I couldn't wait to shoot some deer. In 2006 I ended getting some really good shots of some big bucks. The next couple years I gradually progressed into birds in my yard which helped me learn all about my camera. Finally learning exposure, shutter speeds, aperture took my pictures to a new level. Then in December of 2006 something amazing happened. I was out driving & came upon a dead deer with a huge bird on it. As I got close it flew into a tree & I shot pictures for an hour. Turns out it was a golden eagle! A month later, I saw an article in the paper about watching bald eagles on the Delaware river in winter. I took a ride up with my friend John & we ended up seeing 4. That was it. I was hooked and obsessed with getting a good photo of one. Over the next 8 years I've traveled to the upper Delaware region in search of photographing these awesome raptors. As I got closer to them I upgraded my equipment. First a 300mm f/2.8 I used with a 2.0 teleconverter which gave me a 600mm 5.6. With this combination I was able to get some great shots for a couple years. Then in 2011 I purchased a 500mm f/4 which I used on & off with a 1.4 teleconverter. This lens was the best thing I ever bought. Coupled with my Canon 7d my photos got even better then I could've ever dreamed. In 2012, I started collecting butterfly shots as well. I'm just starting so I only have a few but I hope to find some more soon. At the end of 2012 I upgraded to a Canon 1D MarkIV. It gave me the best opportunity for better flight shots and it's really paid off. Allowing me to shoot hawks, harriers & owls so much better. A few years later I upgraded to a 1DX and a couple years later the Canon 1DX Mark2 with a 600mm f/4 Mark2 prime lens.My main camera now is a Canon R5. Amazing the photos you can get all from the seat of my car as that is where I took them all from. Hopefully in the future I will continue to share my photos with all of you as I travel the country side & back roads of Sussex County!